After months of reading and learning to inform my creative practice, I wanted to synthesize what I learned, and to share that synthesis. I am proud that Street Roots published an article I wrote on local responses to the financial meltdown connected to foreclosures. Check out the Dec. 24 issue! And I hope to complete a article on mortgage modifications, telling one family’s story, in the new year….

I printed 200 broadsides of the dropcloth poem, and created a pdf that will be included in the final Dusie Kollektiv. Download the pdf: <a href="sand_dusie5“>

teachers of the craft

In the hours before I was to hang my dropcloth poem for the econ salon, my mom & grandmother picked up the poem and began to embroider. As they did that, I reflected on how they taught me to embroider as a child–that any ease I find now through embroidery comes through a tradition. And my daughter added french knots to make the periods and colons and dots for each ‘i.’

Posted on December 10, 2010 by thehappyvalleyproject

Posted on December 10, 2010 by thehappyvalleyproject

Posted on December 1, 2010 by thehappyvalleyproject

I launched this project after reading an article two years ago about the high foreclosure rate in Happy Valley by Ryan Frank in the Oregonian. I was also reading Mike Davis’s Planet of Slums about the the millions of people who live in impermanent dwellings across the globe. My work began to dwell on the uneven distribution of shelter.

Some of us take up so much space for our shelter. Some, so little. We dwell in a landscape of foreclosed houses, those shells of shelter, and also, shelter-less people.

My investigation zeroed on the financial speculation that puffed around the housing foreclosures. Its complexity and obscurity are its power. Thus, I doggedly read, focusing less on the over-aspiring homeowner or even the real estate flipper, and more on the leveraging that was so extreme, it could collapse the economy.

Seems like a good subject for poetry. I am interested in a poetic practice that insists on inexpert inquiry, gathering ideas and ways of knowing to open a space for more collaborative inquiry. This project brings together people with may ways of knowing and creating–video creation & installation, radio talent, economics, magic, whistling, sewing, writing, organizing …

A key format for the Happy Valley project is the Econ
Salon, gatherings around economics in cultural formats.

2 More Days Until the Econ Salon at Field Work

Posted on November 30, 2010 by thehappyvalleyproject 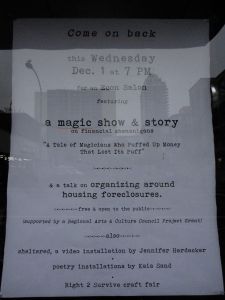 3 more days until the Econ Salon at Field Work

Posted on November 29, 2010 by thehappyvalleyproject

***Jennifer Hardacker setting up her video installation on a clam shell, “Sheltered.”***

Posted on November 22, 2010 by thehappyvalleyproject 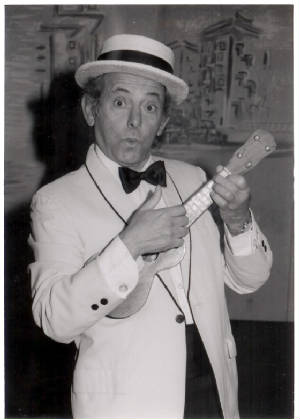 Internationally acclaimed whistler and magician Mitch Hider is collaborating with Kaia Sand to tell a tale of financial fiasco, “The Magician Who Puffed Up Money that Lost its Puff” through magic, whistling, and storytelling on Wed., Dec 1, at 7 PM. at the Field Work gallery (the corner of S.W. 11th Avenue & Jefferson in downtown Portland). The performance will be followed by a talk by Angela Martin, executive director of Economic Fairness Oregon, on the housing foreclosure crisis and current organizing efforts.

The evening event will also include a screening of an 8-minute video, It’s a Wonderful Time to Buy, and ongoing installation projects by Jennifer Hardacker (Sheltered—a video) and David Buuck (“Matta Clark Park Series”—a poster project). The evening’s events will end by 9PM.

The structure of this event is an Econ Salon, a format launched in 2008 blending economic talks with cultural performances. The event is part of the Happy Valley Project, an ongoing poetic investigation of housing foreclosures and financial speculation by Kaia Sand https://thehappyvalleyproject.wordpress.com/

The Happy Valley Project will reside in Field Works (SW 11th & Jefferson) from Monday, Nov. 29-Sat. Dec. 4. Aside from the Dec. 1 evening performance, the space will be open during the day for the installation projects.

Sheltered, by Forest-Grove based experimental video-maker Jennifer Hardacker, illuminates the inside of a shell with video images of boys, who share their ideas of their dream homes. Oakland-based David Buuck’s “Matta Clark Park Series” is a poster project claiming various off-limits public and private spaces as conceptual parks.

Field Work is located in a former downtown storefront. A collaboration between PSU’s MFA in Contemporary Art and Graphic Design programs, Field Work is a platform for students, artists and curators to engage and collaborate directly with the public. http://www.fieldworkspace.org.

Mitch Hider is a long-time professional musical whistler and vaudeville-style performer. He is in the National Whistlers Hall of Fame and is a noted historian of whistling; he has given talks about the history, using vintage recordings. Mitch whistles, sings, yodels and scats; he does standards, jazz, show tunes, sacred, western, novelty, international and more. He does opera parody and a humorous magic show. He plays ukulele, harmonica, drums and other novelty instruments. He uses a table of hats and props. Mitch’s shows have a lot of humor, but he also does church programs and has whistled at many funerals. He once whistled with “Bertha the Harmonica-Playing Elephant.”

Angela Martin is the director of the Economic Fairness Coalition of Our Oregon, where she focuses her legislative advocacy and policy work on predatory lending, credit and debt issues. Prior to working with Our Oregon, Angela was part of the Oregon Food Bank’s public policy team, providing research and analysis on state and federal policy issues affecting low-income Oregonians. Angela’s professional career in policy research and legislative advocacy is supplemented with years of political organizing experience gained on state and local electoral campaigns.

Kaia Sand is a poet and essayist who explores contexts that exceed the book. Supported by a Regional Arts and Culture Council project grant, she is currently working on the Happy Valley Project, a multi-media poetry project investigating foreclosures and financial speculation. Her book, Remember to Wave (Tinfish Press 2010) investigates political geography in North Portland, which takes the form of a poetry walk. She is also the author of a poetry collection, interval (Edge Books 2004), and co-author with Jules Boykoff of Landscapes of Dissent: Guerrilla Poetry and Public Space (Palm Press 2008). Sand has created several chapbooks through the Dusie Kollektiv, which also published her wee book, lotto. Her poems comprise the text of two books in Jim Dine’s Hot Dreams series (Steidl Editions 2008).

Bios for ongoing installations
David Buuck is the author of The Shunt (Palm Press, 2009) and numerous small-press chapbooks and pamphlets. He is the founder of BARGE (the Bay Area Research Group in Enviro-aesthetics). The Matta-Clark Memorial Parks Posters are named after Gordon Matta-Clark, who in the 1970s bought up un-used property-slices in New York as part of his “Fake Estates” project, re-framing these ‘odd lots’ as found public art. In this ongoing project, BARGE hopes to claim various off-limits public and private spaces as conceptual parks, in order to reframe and highlight how space gets cordoned and fenced off from the public, and how the ‘enviro-aesthetics’ of the urban landscape tends to reinforce such divides. (More information can be found here: http://www.davidbuuck.com/barge/mattaclarkparks/index.html)

Jennifer Hardacker is an experimental short film/video maker and educator. She has been making films and videos for over 13 years and her films have screened widely in festivals across the US. Her films are interested in re-imaging and re-imagining the meaning and context of images. Currently, Hardacker teaches film/video studies and production at Pacific University in Oregon. Prior to life in the Northwest, she taught film at the University of Michigan and The New School University in New York City. She also spent time working professionally in New York as an editor and assistant editor of television c

Posted on November 6, 2010 by thehappyvalleyproject